I admit, I used to willingly eat Frankenfoods rather than eating real food, opting for low-fat or non-fat mayo or ice cream, margarine or spread, skim milk, turkey bacon, non-dairy creamer, and many more that I really don’t care to remember. 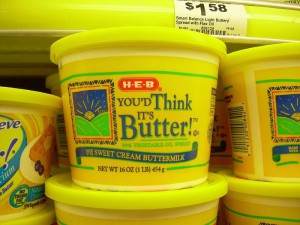 People smarter than me – or so I thought – with letters behind their names said to eat these foods in order to be healthy.

Around this time in 2007, I was finishing a run of a play in which the cast partied hard every weekend during the run and even sometimes went onstage the next day still drunk, or at least severely hung over. In order to clean up my act I hopped on the Anabolic Diet and could eat pretty much as much protein and fat as I could handle during the week and then carb up on the weekends.

I began reading the labels on food to make sure I didn’t sneak in any extra carbs during the week. This led me to realize just how much crap is in these so-called “healthy” foods – a.k.a. Frankenfoods. Then I compared these to the so-called “unhealthy” foods – cream, butter, mayo, whole eggs, etc. – and saw the number of ingredients were a heck of a lot less than the Frankenfoods.

I put on my thinking cap and couldn’t figure out why something with less ingredients, which came from real, natural sources, would be worse for you than all the crappy ingredients created in some mad scientist’s lab. And the best part about when you eat real food, is that real food TASTES so much better! Butter on sweet potatoes, heavy cream in coffee, bacon fat for frying whole eggs. If you want a real treat, try one of Vince Gironda’s faves – raw eggs mixed with heavy whipping cream. Toss in a bit of chocolate protein powder along with some cinnamon and nutmeg and it tastes like heaven on earth. 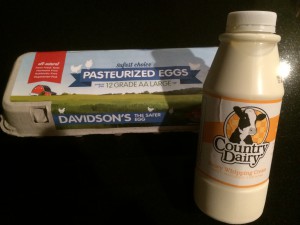 Here we are towards the end of 2014 and after seven years of eating real food it seems mainstream media is finally catching up to what I discovered years ago. In fact, even though I’ve been there, done that, took what I liked and ditched the rest, the Paleo Diet was the most searched diet of 2013.

But still, the general population needs some work. I love breakfast foods and occasionally skip fasting just so I can get an omelette in the cafe at my office. It’s priceless to watch look of horror on the face of the (usually overweight) person who just ordered Egg Beaters in Pam while I order four real eggs smothered in butter with bacon.